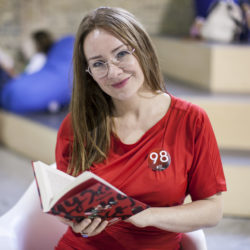 A journalist and a writer, she has worked for Polityka for 15 years. From 2012 to 2017, she was the domestic affairs section editor. Her reportage has won her numerous awards. Her debut novel Nieczułość received Pomorska Nagroda Literacka and Gryfia prize, as well as being long-listed for Nike prize. It was translated into three languages. The story of  her latest book Kot niebieski  takes place in Kashubia.