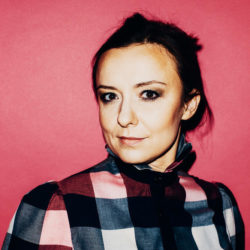 A graduate of the Academy of Theatre Arts in Cracow, she has worked as an actress in Teatr Wybrzeże since 1998. She has received two awards from the marshal of the Pomorskie voivodeship. In 2002, she was named ‘the best actress’ for her role in Noże w kurach directed by Rudolf Zioło. In 2003, she was awarded for ‘acting’ in Beczka prochu and Monologi waginy. She has collaborated with the following directors: Krzysztof Nazar, Rudolf Zioło, Grzegorz Chrapkiewicz, Grażyna Kania, Marcin Liber, Ewelina Marciniak, Remigiusz Brzyk, Krystyna Janda, Adam Orzechowski, and Jan Klata. Since 2016, she has worked for Teatr Polonia in Warsaw.

As an art facilitator, from 2013 to 2015, she organised in the Baltic Sea Cultural Center in Gdańsk a series of meetings for children Gdańsk czyta dzieciom, and in 2016 – Raymond Queneau’s Ćwiczenia stylistyczne in The BOTO theatre in Sopot. She has compèred various events and conferences, and done revoicing for children’s and youth movies.